by Mohammad Asad
in Entertainment, Featured
A A
0

TV host Aamir Liaquat Hussain presented baby girls to two unsuspecting couples during his show, which is broadcast live for seven hours a day during the month of Ramadan.

Plumbing new depths in the battle for television ratings abandoned babies are being given away on a controversial prime-time game show in Pakistan.

“I was really shocked at first. I couldn’t believe we were being given this baby girl,” said Suriya Bilqees, now a mother of a two-week old. “I was extremely happy.”

Another baby, a boy, is due to be given to another couple at some point in the coming days.

The show’s host has been described as a religious scholar, TV megastar and even a sex symbol. His heady mix of religion and entertainment is often followed by controversy.

“At Christmas there’s Santa Claus to give everyone gifts, it’s important for Christians. For us Ramadan is a really special time so it’s really important to make people happy and reward them,” said Hussain.

His show — Aman Ramazan — has been dubbed Pakistan’s version of The Price Is Right, with members of the 500-strong audience receiving prizes in exchange for answering questions on the Quran.

He also cooks while men sing Islamic hymns and discusses religion with children in a garden full of rabbits, snakes and goats.

The baby girls given away on the show were found by an NGO, theChhipa Welfare Association, which says it receives up to 15 abandoned babies a month.

“Our team finds babies abandoned on the street, in garbage bins — some of them dead, others mauled by animals. So why not ensure the baby is kept alive and gets a good home?” said Ramzan Chhipa, who runs the organization.

“We didn’t just give the baby away. We have our own vetting procedure. This couple was already registered with us and had four or five sessions with us.”

But, the couple didn’t know they would be handed a newborn when they were invited to take part in the show and paperwork was not processed before the live broadcast.

Adoption is not officially recognized in Pakistan and there is no adoption law. The couple will have to apply for guardianship at a family court.

Some viewers praised the show’s baby giveaway but others declared it a publicity stunt.

“Pakistan wake up,” Shamim Mahmood wrote on the NGO’s Facebook page. “Babies are not trophies to be handed to just anyone.”

Hussain says it isn’t a gimmick to win ratings during the Islamic holy month. He believes his show is unifying a fractured nation, plagued by sectarian violence, religious intolerance and terrorism.

“These are the disenfranchised babies that grow up to be street kids and used for suicide bombing attacks. We have tried to show an alternative,” he said.

“Telling people to take these kids off the rubbish on the streets, raise them and make them a responsible citizen, not to destroy society through terrorism,” he said.

The show has proved extremely popular, breaking ratings records and may be extended beyond its Ramadan run. He is also planning another program where the audience will be from the minority Hindu, Sikh and Christian communities. 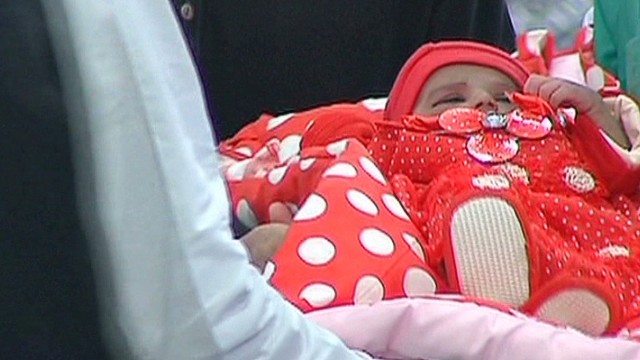