How to make an Android Phone look like iPhone?

by Mohammad Asad
in apk, App Reviews, Featured, How to
0

Android Users usually do not want their phone’s user interface to look like iPhone. They are Android Users because they wanted to be Android Users. But some of us are Android Users because of the freedom that Android gives. We like the iPhone User Interface, but since iPhone is so closed and restrictive we chose to go with Android. Or still, some of us have just moved from iPhone to Android, are just getting used to Android Way and we want time to get used to the whole Android Experience. Or some of us just want to try something new for the kick of it without having to pay Apple. That is when we start searching for ways in which we can make our Android look like iPhone.

Is there some way in which we can make our Android Phone look and behave like iPhone? There are many options to make your Android Phone look like an iPhone. The most popular way is to download Go Launcher or Launcher Pro and get one of their many themes that look like an iPhone. But the problem here is, Go Launcher or Launcher Pro themes do not keep two key things that differentiate an Android from an IPhone.

One, iPhone does not have widgets. Android has plenty of them. Widgets are one of the reasons why people love Android. So if you want to make your phone look exactly like iPhone, you need to forget having Widgets around. [On second thought, the only widgets that I use are the Clock Widget and the Search Widget. But you miss the widget functionality if you do not have it around.

Now, Go Launcher or launcher Pro themes that promise to make your phone look like iPhone, do not take away these two key functions from Android – the App Drawer and Widgets. That is where you need to try out this new kid in the block from China – Espier Launcher. You can download Espier Launcher from here. 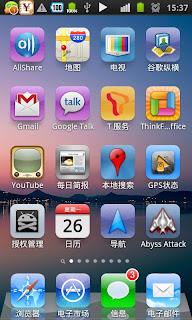