the mission to send that red Tesla to Mars! Well, kinda. According to the New York Times: “The car will not go into orbit around Mars. Rather the second stage of the Heavy is to fire three times to send the car on an elliptical orbit around the sun that extends as far out as Mars, and that car could remain in orbit for hundreds of millions of years. At times, it might pass very close to Mars, and Mr. Musk said there was an ‘extremely tiny’ chance that it could crash into Mars.”

SpaceX launched the Falcon Heavy rocket from the Kennedy Space Center in Florida at 3:45 pm EST  watch the full video.

Thousands of people gathered in Florida to watch the launch – the culmination of a plan five years in the making.

Mr Musk used a super rocket – the Falcon Heavy vehicle – to send the car into orbit around Mars, deploying technology with twice the launching power of any existing rocket, and double that of the Saturn V, which launched the Apollo lunar missions.

The Spacex CEO had billed the takeoff as a risky first attempt, saying the challenges of building the Roadster meant the chances of success might only be 50-50.

However, his fears were not realised with the world’s most powerful rocket successfully taking off from the Kennedy Space Center at 3.45pm local time (8.45pm GMT).

About two and a half minutes after the launch, two of the three boosters on the rocket detached and landed upright, at the same time, at Cape Canaveral Air Force Station.

Among the online spectators was British Astronaut Tim Peake, who described the feat as “simply awesome”.

Mr Peake tweeted his congratulations the team on “a phenomenal technical achievement”, adding that it marked “the dawn of a new era of space exploration”. The car will take at least six months to travel the 200 million miles to Mars.

Speaking to reporters ahead of the Cape Canaveral launch, he said: “It’ll be a really huge downer if it blows up. If something goes wrong, hopefully it goes wrong far into the mission so we at least learn as much as possible along the way.

“I would consider it a win if it just clears the pad and doesn’t blow the pad to smithereens. That’s four million pounds of TNT equivalent so there’s probably not going to be much left if that thing lets loose on the pad.”

The Falcon Heavy consists of three of the company’s Falcon 9 rockets joined together, each lending the super-rocket 27 Merlin engines.

This means that it should be able to generate almost 23,000 kilonewtons of thrust – just over double that of the world’s current most powerful rocket, the Delta IV Heavy, which is operated by US competitor United Launch Alliance.

The South African-born entrepreneur has promised “epic views” of space from cameras strapped to the vehicle.

It is hoped the car will be thrown into an elliptical orbit that stretches out to Mars’ orbit around the Sun.

The rocket is designed to lift the equivalent weight of five double-decker London buses – 64 tons – into space.

If this maiden voyage is successful, it raises interesting possibilities for future innovation, including larger US satellites and also the realisation of Mr Musk’s dream to launch hundreds of satellites into space in order to give broadband internet access to the developing world.

It also means space exploration could be hugely enhanced, with larger robots sent to Mars. Some could even visit outer planets such as Jupiter, Saturn and their moons.

Nasa is also developing a super-rocket, but Mr Musk’s, if successful, is much cheaper. 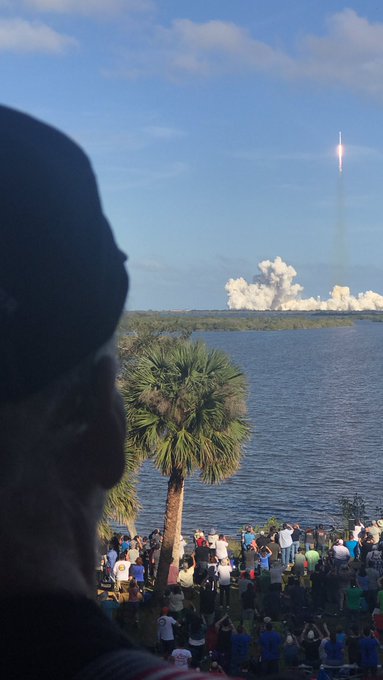 Their Space Launch System is said to cost $1bn (£715m) per flight, while the entrepreneur claims his Falcon Heavy will cost just $90m (£64m) per flight.

Casey Dreier, director of space policy at the Planetary Society, told The Guardian: “If Falcon Heavy is up and running, it opens up a lot of possibilities. That’s the key.

“Nasa is going to be saying: look, instead of waiting around for SLS, we can start putting pieces of our deep space gateway or orbiting lunar outpost in place. The question is will it be reliable enough for the government and others to put in their most valuable assets, to be worth the reduced cost?”