Istanbul — Turkey is due to unveil Tuesday a three-billion-euro rail tunnel under the Bosphorus connecting Istanbul’s European and Asian sides, one of several mega projects driven by the Islamic-rooted government in the country’s main gateway city.

The 13.6-kilometre (8.5 miles) tunnel includes an immersed tube tunnel which government officials say is the world’s deepest at 60 metres (nearly 200 feet) below the seabed.

The inauguration of the ambitious project that has cost an estimated three billion euros coincides with the 90th anniversary of the founding of modern Turkey.

A railway tunnel underneath the Bosphorus Strait is due to open in Turkey, creating a new link between the Asian and European shores of Istanbul.

The tunnel is the world’s first connecting two continents, and is designed to withstand earthquakes.

It is being opened on the 90th anniversary of the Republic of Turkey.

Japan invested $1bn of the $4bn (£3.4bn) total cost of the project, named Marmaray, which is a conflation of the nearby Sea of Marmara with “ray”, the Turkish word for rail. 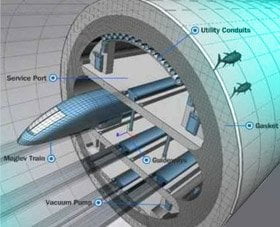 Reha Muhtar in Vatan: “It is a miraculous project that tells something about the horizons of this country and its people… Today, two continents are being united under the sea. This is a first in the world.”

Suleyman Solmaz, from the Union of Chambers of Turkish Engineers and Architects, in Radikal:“Firstly there are no safety wagons; secondly, there is no electronic security system. The tunnel about to open doesn’t have a safety control centre.”

Taha Akyoll in Hurriyet: “Let us make the opening of a historically great project like Marmaray, on the 90th anniversary of the Republic, a symbol of overcoming polarisation. In the inauguration of this work, which was constructed with the taxes of 75 million people, the government should use an inclusive tone.”