The US state department urged Egypt’s leaders to put a stop to the violence. UN Secretary General Ban Ki-moon called for demonstrators to be protected. The army removed Mr Morsi on Wednesday following protests by millions.

Pro-Morsi protesters were gathering on Saturday in Cairo’s Nasr City area. The ousted Islamist president’s opponents have called for demonstrations against the Muslim Brotherhood, to which he belongs, on Sunday.

He is in detention, along with some senior Brotherhood figures. Early on Saturday, state media reported the Brotherhood’s deputy leader Khairat el-Shater had been arrested at his Cairo home on suspicion of incitement to violence. Middle East analyst Sakhr al-Makhadhi: “Morsi’s removal was in some ways a democratic coup”

Meanwhile the army issued a statement on its Facebook page denying that some of its field commanders were putting pressure on the commander-in-chief to reinstate President Morsi.

“These rumours… come within the context of the continued attempts to spread rumours and lies as one of the methods of the systematic information warfare being waged against the armed forces with the aim of dividing its ranks and striking at its strong cohesion…,” the statement said.

In a separate development, former president Hosni Mubarak appeared in court on charges of corruption and involvement in the deaths of protesters during the 2011 revolution that ousted him and ultimately brought Mr Morsi to power.

The trial was adjourned until 17 August.

Some 36 people died and more than 1,000 were hurt in Friday’s clashes, which have been condemned by the US.

“We call on all Egyptian leaders to condemn the use of force and to prevent further violence among their supporters,” said state department spokeswoman Jen Psaki.

Mr Ban’s spokesman Farhan Haq said that it was for the people of Egypt to determine the way forward – and all people, including women, needed to be part of that process.

He referred to “horrifying reports of sexual violence”.

“The Secretary-General believes strongly that this is a critical juncture in which it is imperative for Egyptians to work together to chart a peaceful return to civilian control, constitutional order, and democratic governance,” Mr Haq said.

“Egypt’s political leaders have a responsibility to signal, by their words and their actions, their commitment to a peaceful and democratic dialogue which includes all of Egypt’s constituencies, including women.”

The comments came as at least 12 people died and 200 were injured in the Mediterranean city of Alexandria, mostly from gunshot wounds. Eight died in two separate clashes in the capital Cairo. 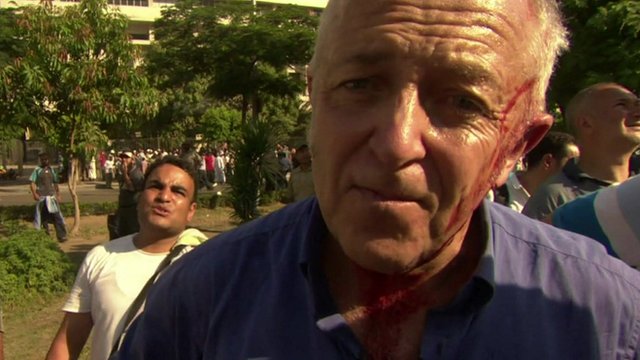 Jeremy Bowen witnessed the shooting, and was also hit by shotgun pellets above the ear

Four of those were killed after troops opened fire on crowds as they advanced on the headquarters of the Republican Guard, where Mr Morsi is believed to be held.

In the evening, another four died when Brotherhood supporters surged across the 6th October Bridge over the Nile river, towards Tahrir Square where anti-Morsi protesters were gathered, before tanks arrived to separate the protesters and the violence died down.