US President Barack Obama has warned that Wall Street should be concerned that a conservative faction of Republicans is willing to allow the country to default on its debt.

The US government has partially closed after Congress failed to agree a budget and will run out of cash on 17 October unless its debt ceiling is raised.

The US government closed non-essential operations on Tuesday after Congress failed to strike a deal on a new budget.

Republicans and Democrats are blaming each other for the impasse.

However, as one budget crisis raged in Washington DC, another one – potentially more dangerous – loomed in the coming weeks.

On 17 October, the US government will run out of cash to pay its bills unless the debt ceiling is raised.

On Wednesday, Mr Obama met the heads of some of Wall Street’s biggest banks – including JPMorgan Chase, Goldman Sachs and Bank of America – to discuss the debt ceiling and other economic issues.

The bankers are members of the Financial Services Forum, a lobby group which has, along with 250 other businesses, sent a letter to Congress urging it to raise the debt limit.

As foreign markets anxiously monitored the US budget crisis, European Central Bank chief Mario Draghi warned that a protracted shutdown was “a risk not only for the US, but also the world economy”.

Earlier on Wednesday, senior US intelligence officials warned the shutdown of the government seriously damaged the ability of spy agencies to protect the US.

Director of National Intelligence James Clapper told a Senate panel that an estimated 70% of intelligence workers had been placed on unpaid leave.

Also on Wednesday, the White House announced Mr Obama would cut short a planned four-nation tour of Asia next week.

He will attend regional summits in Indonesia and Brunei, but skip Malaysia and the Philippines due to the government shutdown.

The US government ceased operations deemed non-essential at midnight on Tuesday, when the previous budget expired.

National parks and Washington’s Smithsonian museums are closed, pension and veterans’ benefit cheques will be delayed, and visa and passport applications will go unprocessed. 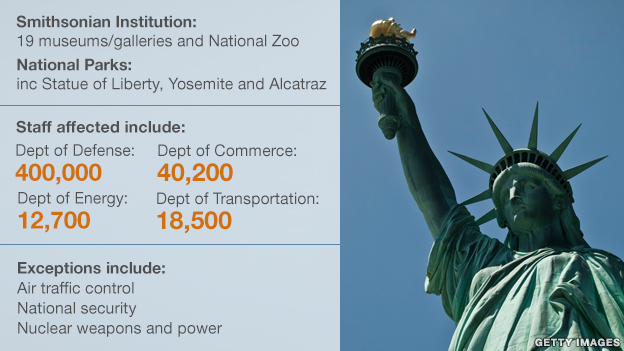