The tragedy sent shock waves through the hockey-loving country and engulfed the home of the Humboldt Broncos ice hockey team, a small farming town of fewer than 6,000 people, in grief. Fourteen survivors were in hospital, with some in critical condition, the Royal Canadian Mounted Police (RCMP) said.

The team had been traveling to a playoff game when the accident occurred at about 5 p.m. on Friday near the Tisdale area, around 185 miles (300 km) north of Regina.

“Our Broncos family is in shock as we try to come to grips with our incredible loss,” Kevin Garinger, the team’s president, said in a statement. 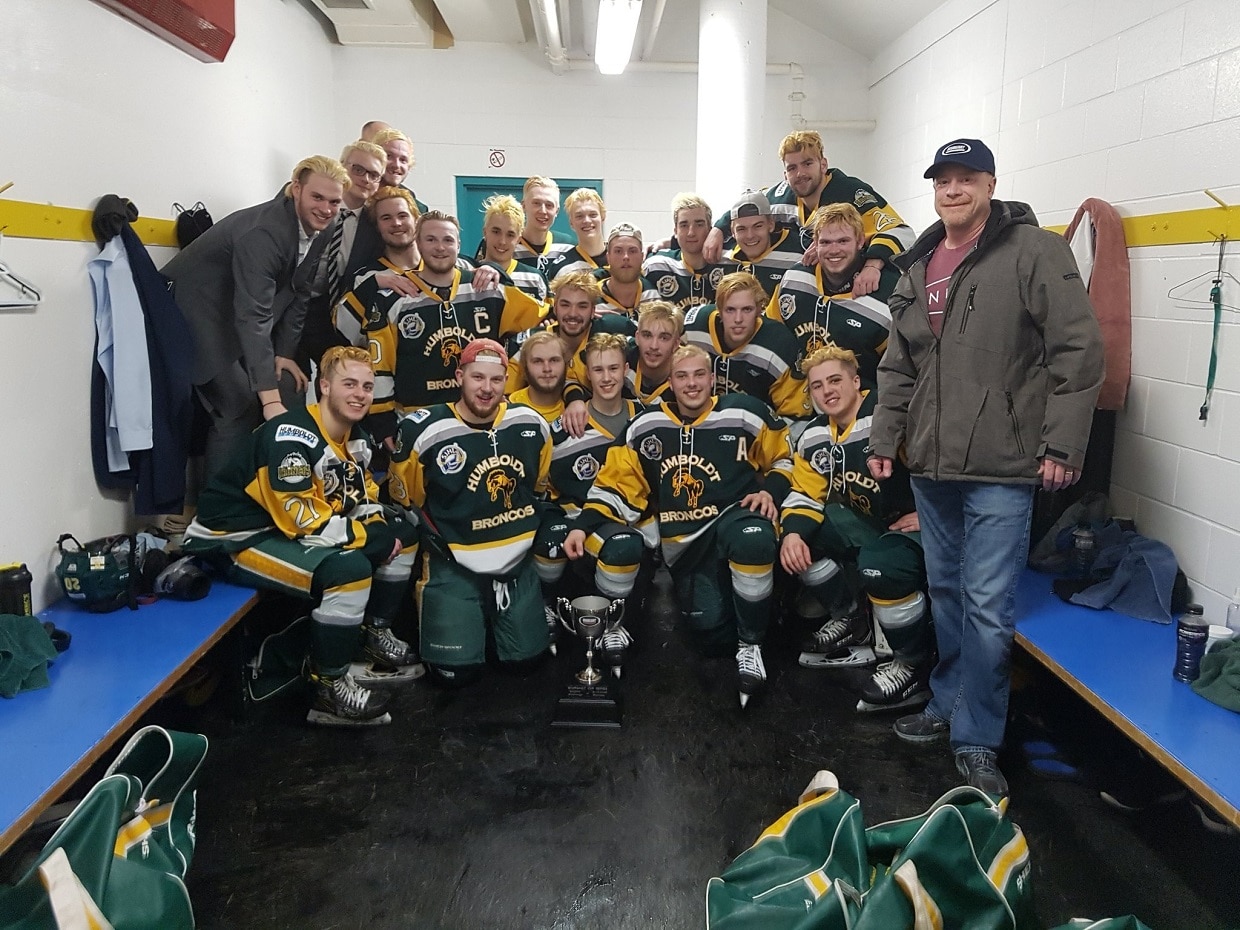 The players had been on their way to compete in Game 5 of a playoff series against the Nipawin Hawks when the bus they were traveling in collided with a semi-trailer.

The Hawks’ president, Darren Opp, told the Globe and Mail newspaper that the truck T-boned the players’ bus. “It’s a horrible accident, my God,” he said. “It’s very, very bad.”

The driver of the tractor trailer was not injured in the crash, RCMP Saskatchewan assistant commissioner Curtis Zablocki told a media conference. He said the driver was initially detained, but later released.

RCMP is continuing its investigation and it was too early to comment on the cause of the collision, Zablocki added. 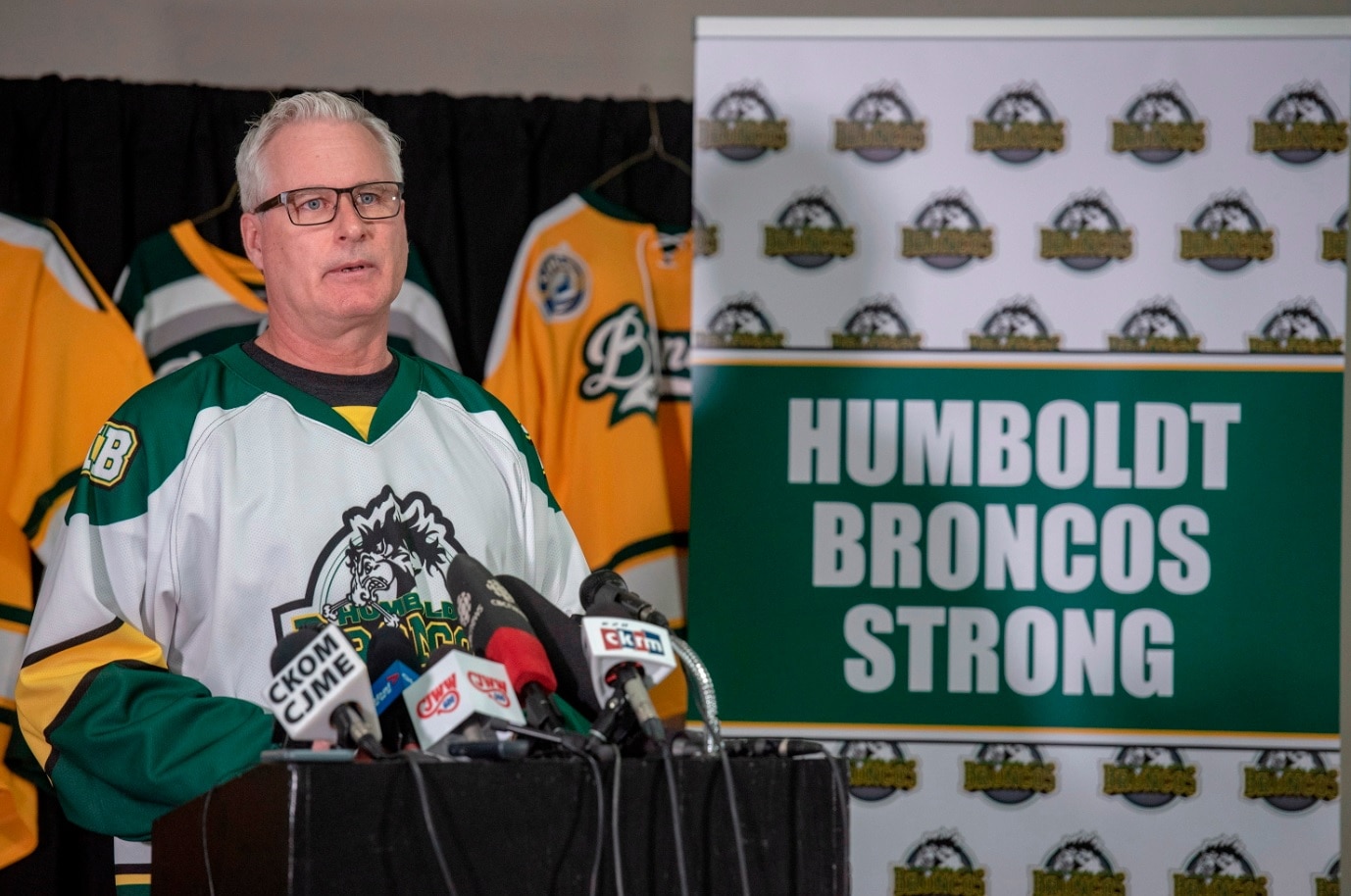 Rob Muench, Mayor of Humboldt, speaks during a press conference at the Elgar Petersen Arena in Humboldt, Saskatchewan, on Saturday, April 7, 2018.
AAP

Citing relatives, the Canadian Press reported that the Broncos’ head coach Darcy Haugan and the team’s 20-year-old captain, Logan Schatz, were among those killed.

Many social media users posted Haugan’s photograph alongside messages of shock and sympathy, and the hashtags #prayersforhumboldt and #humboldtstrong.

“God bless Darcy Haugan for being an incredible mentor and coach to young hockey players and prayers for his family to help cope with their immense loss,” the Western Provinces Hockey Association wrote on Twitter.

National Hockey League Commissioner Gary Bettman said the NHL mourned the passing of those who died “and offers strength and comfort to those injured while traveling to play and be part of a game they loved.”

A steady stream of people arrived at Humboldt’s Elgar Petersen sports arena on Saturday, consoling the grieving families and offering flowers. Counseling services for the victims’ relatives were offered in a nearby room.

“We woke up to the reality of what happened last night,” Humboldt Mayor Rob Muench told Reuters. “It has been a tragedy nobody would have imagined. It’s very tough, but I have been trying to get the message out that we will get through this, we will see the light at the end of the tunnel.”

“I cannot imagine what these parents are going through, and my heart goes out to everyone affected by this terrible tragedy, in the Humboldt community and beyond,” Canadian Prime Minister Justin Trudeau wrote in a tweet.

US President Donald Trump said in a Twitter post that he had spoken with Trudeau “to pay my highest respect and condolences to the families of the terrible Humboldt Team tragedy. May God be with them all!”

Pastor Jordan Gadsby of Nipawin’s Apostolic Church said hundreds of people, including parents and relatives of players on the bus, had gathered at the church late on Friday to seek information and solace.

“The worst part of the night was watching parents waiting for news of their kids,” he said. “There’s not a lot we can do. It’s a terrible thing that happened.”

For some, the tragedy revived painful memories of a bus crash in the province in December 1986 that killed four young players from the Swift Current Broncos ice hockey team.

An online fundraising campaign for the affected players and their families, with an initial target of $10,000, was set up late on Friday by the mother of a former Broncos teammate. By lunchtime on Saturday it had raised more than $1 million.

The Prime Minister, Justin Trudeau, today issued the following statement on the tragic bus‎ crash that took place in Saskatchewan on Friday evening:

“An entire country is in shock and mourning today as we learn more about the tragic bus crash involving the Humboldt Broncos that claimed the lives of 14 people, and injured many more.

“We are heartbroken knowing many of those we lost had their entire lives in front of them. We grieve with those facing news no parent or family should ever have to face. And our hearts go out to the community that has lost teammates, coaches, friends, and mentors.

“This is every parent’s worst nightmare. No one should ever have to see their child leave to play the sport they love and never come back.

“Our national hockey family is a close one, with roots in almost every town – small and big – across Canada. Humboldt is no exception, and today the country and the entire hockey community stands with you.

“I thank the first responders – the RCMP, the Provincial Response Team, and medical personnel – who worked tirelessly through the night, and continue to respond to this incredibly difficult situation with courage and professionalism.

“To the entire Humboldt community: We are here for you. As neighbours, as friends, and as Canadians, we grieve alongside you.”